“Why am I still single?” It’s a question I hear a lot in my practice. As a clinical psychologist in New York City, I work with many successful clients — while they’re really good at getting things done in their professional lives, their dating life is either nonexistent or chaotic.

If you’re anything like my clients, you may at times feel frustrated because while you believe you’ve done all the right things to find the right person, you don’t understand why it isn’t happening. If you feel like you hit a wall when it comes to dating when you’re otherwise confident and successful, see if what’s holding you back is one of these top reasons that I find my clients often struggle with.

1. Your idea of being open to dating someone different means they have a different favorite color.

OK, I’m being a little facetious here, but I do see a lot of clients who rule out potential matches over things that are actually really minor in the context of lifelong partnership — whether because of a height that’s less than ideal, political views that don’t match perfectly, or even a grasp of the hottest nightclubs. Remember that in a partnership, the way you manage the areas where you differ is actually very important. Try to boil down a short list of your absolute essentials in dating (aim for 3 to 4 qualities, such as “kind-hearted, wants marriage/kids, successful, physically fit”) and then do your best to let the other things fade into the background so that chemistry has a chance to develop.

2. You come across as critical without even realizing it.

Some of my clients have a way of presenting themselves that makes them look and sound critical: They squint their eyes and use a dismissive tone of voice, or they don’t make a lot of eye contact, smile, or demonstrate a lot of interest or excitement in the world around them. The interesting part is that when asked if something is wrong, these types of people seem genuinely surprised. They aren’t depressed — this is just their normal way of presenting themselves.

Why do they do this? There are all kinds of reasons why someone could come to present themselves in a way that others experience as closed off. Maybe they’re insecure and take on a dismissive air because they’re afraid of being rejected, for example.

Because I’m meeting them as a psychologist rather than a potential friend or date, I am undeterred by all this — even if they give me terse answers or quizzical “umm’s,” I continue to show interest in them, try to engage them, and draw them out. Usually, this is all it takes — after five to ten minutes of me being super-nice and reassuring, they come out of their shell and actually turn out to be really sweet people. However, I’m not surprised when they complain that their dating life is stalled and that they can’t seem to attract a positive and enthusiastic partner.

I’m not saying that people should be false and pretend to be the Happiest Person Ever on dates, but it’s important to let your date see you in your best light. Start by making sure you arrive in clean clothing in flattering colors, styled hair, and wearing a little makeup. Then once there, smile and say something positive about the setting or the weather. Don’t put yourself or your date down, even in jest, and remember: First dates aren’t the time to open up about your abusive boss, mounting credit card bills, or your psycho roommate. One more how-to on letting date see you in your best light: Before the date, scan a newspaper so you can talk about current events like art exhibits, local news, or whatever piques your interest. This gives you a way to share yourself in a way that is confident and relatable; and it can prime the conversation pump so you and your date can have fun getting to know one another!

Many of my female clients are very successful at work, and they are accustomed to getting what they want in their professional lives. What they want in their personal lives often includes a man who is at least as successful as they are, taller than they are, and who will pursue them. But it’s sometimes difficult for these women to actually let the man take the lead like they say they want him to do. Just to make it clear, I’m not telling these women that they need to let a man pursue them; these women are telling me that they’re frustrated by men who don’t pursue them.

So what’s the problem? While they like the idea in theory of letting a man pursue them, they get very frustrated if he doesn’t pursue them on their timeline and in the manner of their preference. They have “talks” with men who they don’t feel are “doing enough” — much like they’d have a chat with an underperforming employee.

But you cannot dictate pursuit. You cannot complain to someone that he isn’t pursuing you. If you do, then he’s only pursuing because you told him to, in which case he is following your directions — which is almost the opposite of pursuit.

If you want to call the shots, fine with me — I’m not here to judge, I’m here to help clients get (almost) whatever they want! But if you want him to lead, you can’t tell him how to do it. This doesn’t mean you have to sit around waiting, though. If he isn’t pursuing you the way you want, date others who will! But don’t tell him to pursue you and then feel surprised when you’re both sensing the awkward tension that will inevitably arise.

Telling a man to pursue you is like telling him how to lead. By doing so, you are actually leading — and depriving yourself of what you’re really craving.

4. You over-invest in a man who hasn’t even asked you to be in a relationship.

The reason many women have trouble just distancing themselves from a man who isn’t pursuing them is because they’ve over-invested themselves in the relationship before the man has earned the investment. They’ve quit dating other people simply because their “favorite” is requesting a lot of dates.

What they don’t think about is that just going on five or six really fun dates where each time you go a little further physically is totally enticing to men, but it doesn’t mean anything in terms of the man’s interest or ability to make a commitment.It can get even more confusing if the man has been saying things like, “I see myself getting married and settling down sometime in the next few years.” The women sometimes misinterpret this as having a talk about his goals and interests pertaining to them specifically.

Like it or not, women have a biological tendency to become commitment-oriented sooner than men when they start having great sex (oxytocin — we’ve all heard about it!). So if you’re having great sex and the man mentions the future, perhaps even invites you to a friend’s wedding or to meet his parents when they visit him next month, your heart can quickly go in limbo.

My advice: If you meet someone special, consider taking things really s-l-o-w. Don’t quit dating other people till he asks you, and if he doesn’t ask you, take that as information about either a) his interest in you, b) his interest in commitment, or c) his ability to pursue and go after what he wants. A man must demonstrate ALL of the above if you’re looking for a committed relationship with someone who pursues you. This is what 99% of my female dating clients specifically tell me they want (a man who will pursue them), and if that’s you too, these tips may help you.

Are you in a pattern of being “just friends” with someone you recently broke up with? If so, the texts, phone calls, and get-togethers could be holding you back from giving yourself wholeheartedly to single life and moving forward. If this is you, it’s time to leave the past behind. Instead of letting someone with whom a relationship hasn’t worked take up all your mental space, why not let go and direct your focus toward the possibility of a new relationship that will potentially be even better that the last?

Fear is a sneaky thing that could be sabotaging your love life without you even realizing. Dating requires vulnerability, and putting yourself out there without quite knowing what you’ll get in return can be scary. If you haven’t had the rosiest of endings in your past relationships, you could be looking at potential dates or new relationships from a fearful lens — whether the fear is being rejected or falling for the wrong person again.

Fears like these aren’t uncommon, but if left unexplored, they can eventually evolve into a reason to consciously or subconsciously avoid dating altogether. If you’ve caught yourself wondering whether you should even bother giving someone a chance because it probably won’t work out anyway, fear could be holding you back.

If you know deep down that the fear is actually more about your own difficulty becoming vulnerable, then encourage yourself to open up slowly — chances are, your fear of intimacy is running alongside a fear of being alone, so give yourself a chance to try something new. And if you know you have a pattern of choosing people who are unavailable, unreliable, or otherwise hurtful, then your fear is actually serving as a helpful reminder to you that you need to get support in choosing healthy dates. Support can come in many forms, such as self-help books, good friends, family, or therapy. One of the most effective treatments for overcoming anxiety and fear is cognitive behavioral therapy (CBT), specifically, so speak with a mental health professional about it. You owe it to yourself to give love a chance this Valentine’s Day — and beyond! 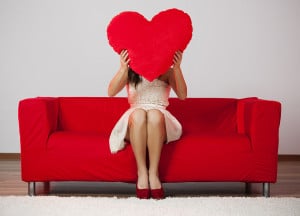